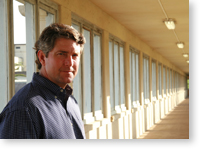 Neil White has been a newspaper editor, magazine publisher, advertising executive and federal prisoner. He lives in Oxford, Mississippi, where he operates a small publishing company, writes plays and essays, and teaches memoir writing.

His memoir, In the Sanctuary of Outcasts (Morrow/HarperCollins), about the year he lived with the last victims of leprosy in the continental United States, was released in June of 2009.

The book was described by Publisher’s Weekly as “Brisk, ironic, perceptive . . . White’s introspective memoir puts a magnifying glass to a flawed life, revealing that all of life is to be savored and respected.” Pulitzer Prize winner Robert Olen Butler added, “At once surreal and grittily naturalistic, funny and poignant, White’s tale is fascinating and full of universal resonance.”

In the Sanctuary of Outcasts was an Indie NEXT Great Reads Selection. The book was a finalist in the “Books for a Better Life” Award. Sanctuary was one of three national finalists for the 2009 Barnes & Noble “Discover Great New Writers” Award. The book was a finalist for the Southern Independent Booksellers Alliance “Book of the Year” award. And in 2010, the Southeastern Library Association named Mr. White “Outstanding Author of the Year.” Foreign language translations have been published in Germany, Croatia and the Netherlands.

Neil is married to Deborah Hodges Bell, a law professor at The University of Mississippi. They have three children — Lindsay Bell, Neil White IV, and Maggie White.